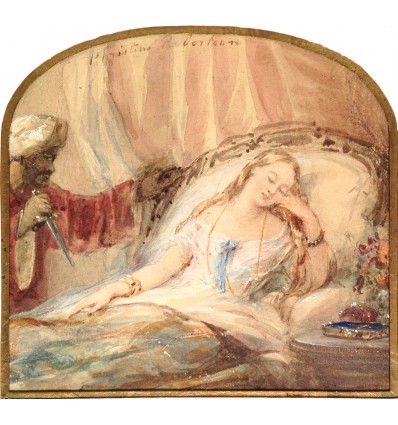 Othello about to kill his wife, Desdemona
Watercolor

Othello about to kill his wife, Desdemona
Watercolor signed above center
Original frame in wood and gilded stucco

An original and rare subject for this artist whose portraits we know mainly aristocratic.

Niece of the miniaturist Georges Sanders, Christina Robertson (née Sanders) was born in Scotland in 1796. We know little about her childhood. She participated in the annual exhibitions of the Royal Academy in London and Edinburgh from 1823 to 1844. Acclaimed by critics, she made many portraits that were frequently used to illustrate the newspapers of the time. In the 1830s, during stays in Paris, she had the opportunity to work for several Russian personalities. In 1839, her popularity among the Russian nobility allowed her to exhibit her works at the Academy of Arts in St. Petersburg, where she went. She became a member of the St. Petersburg Academy in 1841. There she quickly won the favour of court circles and painted portraits of many members of the imperial family and the Russian aristocracy.
She returned to live in St. Petersburg in 1847 and died there in 1854.
Her works can be found in the Moscow Museum of Fine Arts and the Hermitage Museum, among others.