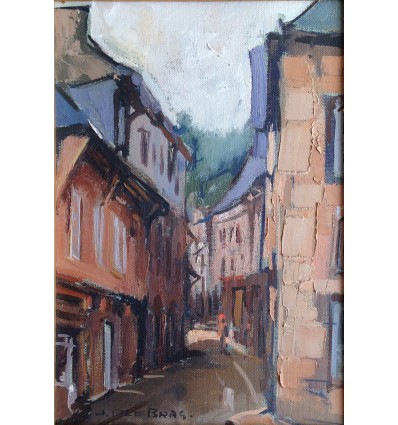 Painter of the Navy
Old street in Brittany

Jean-Pierre Le Bras is Breton, Breton from Lannion, son of the pink granite country that the wave caresses, rooted in this Trégor where prehistory coexists with the year 2000, born a stone's throw from the Christianized menhir of Saint-Uzec who winks at the Radôme while listening to the satellites.

He stays connected to his coast and the nearby countryside. He paints. His nature so wills it; and, the past sixty, solid and quiet as the boats hung on his canvases, he observes and translates, as a witness, far from the fashions.

Since his early youth, on the shores of Pleumeur-Bodou, Ile-Grande, Trégastel, he has known coves and strikes, blond sands and rocks, beaches and ports. He vibrates, happy, and his brush follows, the broad touch, assured, juggling with ochres, combining the knife that sculpts the dough where the light slips; the color sings to the rhythm of the heart.

Jean-Pierre Le Bras has the ardour and passion to say his Brittany, that of Armor or Argoat, Cornouaille or Léon. If you meet him at the corner of a field, a port or a beach, no big words, no snobbery, no tortuous "message" in convoluted terms; but simply "Have you noticed how beautiful it is around here?

Sketchbook always by hand or planting his easel far from the crowds, solitary with his subject, it will be the return to the workshop for the last burst. He seized the moment, the cottage on the shore, the dockside boat waiting for adventure, the low tide and the colourful cohort of fishermen on foot, the dune where the wind flirts with the seagulls.

Figurative, landscape gardener, natural, undoubtedly, but above all, witness with his own writing, a writing that he forged himself, coloured as precisely as possible by his constantly alert sensitivity, going to the essential. And Jean-Pierre Le Bras continues his furrow, the quiet step, more accustomed since childhood - and more at ease - to tread the sand and seaweed of the coasts than the carpet of the living rooms. It has managed to keep, under its apparent harshness, the extreme delicacy of Trégor, that of its terroir. From the bright greys to the expanse of sand, from the deep greens to the blue scales he continues his Breton cantata; the atmosphere of the shores, the atmosphere of the fishing ports, the song of the countryside and the flowers scroll on his canvases.

What's his problem? Translate a moment of truth. "To each his own writing. I paint as I know how to do it without worrying about passing fashions. "A touch pointed to his canvas makes a final note. He blinks his eyes; communion continues. Jean-Pierre Le Bras lights his hand-stitched cigarette... and goes to take a look at other horizons. Calmly, faithful to his environment and friendships.

He received the gold medal at the Salon de la Marine in 1991 and was named "Peintre de la Marine" approved in 1997 and appointed in 2008.

30 other products in the same category: