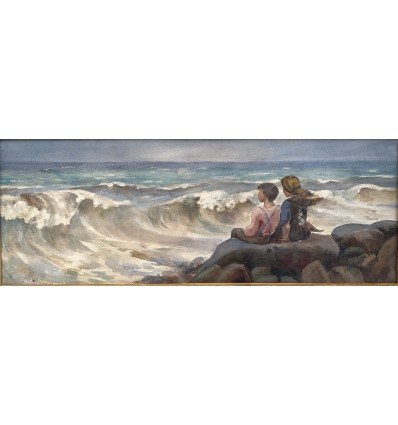 Roger-Henri Expert - most often called Roger Expert - is one of the great architects of the first half of the 20th century. His works are few but original, combining classicism and modernity.

This watercolour was painted in his native city while he was studying at the Bordeaux Municipal School of Fine Arts, painting section, before joining the Paris School of Fine Arts in 1906, thanks to a scholarship, successively in the studios of Gustave Umbdenstock and Gaston Redon. He graduated as an architect in 1912 and was awarded the Second Grand Prix de Rome the same year. He returned to this school in 1922, as a teacher and then head of the workshop in 1934, until 1953.

In 1926, he drew the plans for five villas in Pyla-sur-Mer and Moulleau, on the Arcachon basin, whose elegant lines prefigured the French embassy in Belgrade (1928). Among his other major achievements were the City Hall in Reims (1924-1927), the Tourism Pavilion and the Pavilion of the Great French Railway Networks at the Grenoble Exhibition (1925), and several buildings and installations for the International Colonial Exhibition in Paris (1931), the Ateliers Extérieurs de l'École Nationale Supérieure des Beaux-Arts in Paris (1931-1933), the Groupe Scolaire Kuss street in Paris (1931-1934), several installations on the Paquebot Normandie (1932-1935), the Fontaines of the Trocadéro in Paris (1936-1937), the French Pavilion at the New York Exhibition (1939).